BRAZIL - The International Fair of Machines, Raw Materials and Accessories for the Furniture Industry (FIMMA Brazil) 2019 transformed the optimism of the 380 exhibitors and the 23,657 visitors in good business, from March 26 to 29, in the Events Park of Bento Gonçalves (RS). 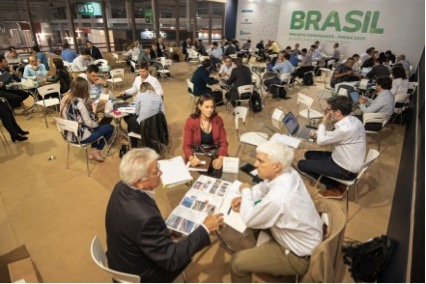 The differentiation, slogan of this 14th edition, made possible connections, knowledge and good surprises. The FIMMA Workshop, in a new format, guaranteed an excellent public, as in the case of Espacio Arqday, one of the unprecedented actions of this fair that aimed to attract specifiers. The know-how of the lecturers of the traditional FIMMA Carpintero project allowed the exchange of information. The new segments, Forestry and Rocks, surprised by the innumerable possibilities of work with the raw materials available.

The presence of the main players of the world and the significant renovation of exhibitors gathered in the 58 thousand m² reaffirmed the credibility and tradition of the fifth largest fair in the world in this segment. Of the total participating exhibitors, 32% of the companies were machines, 20% of raw materials, 18% of tools, 15% of accessories, 10% of components and 5% of other segments. “The result of FIMMA Brasil 2019 is the reflection of months of intense work, in which we seek excellence in each of the proposed actions, bringing what is most representative in the sector. And the result could not have been better, we managed to materialize the differentiation, surprising everyone who visited at the fair,” commemorates the president of the 14th edition of the FIMMA Brazil, Henrique Tecchio.

One of the most consolidated projects, the Buyer Project, guaranteed for two days, in the 1,100 rounds of business, transactions around USD 3 million and the forecast of generation of USD 15 million of prospecting in the next 12 months. The presence of thousands of people in Bento Gonçalves also left for the city near RS 15 million, with the movement that took place in hotels, restaurants, transport, wine and many other sectors. In view of the good results, the initial estimate of USD 290 million is confirmed.

Organized by the sector and for the sector, FIMMA Brasil 2019 showed that it is attentive to the demands of who are responsible for the success of the fair, that is, exhibitors and visitors. In this way, the president of the 14th edition announced that in 2021 the event will take place in the month of August. “We gave voice to exhibitors, businessmen and professionals who visit FIMMA Brazil and after an analysis we have decided to change the month of realization of the fair. We will meet again in August 2021,” announced Tecchio.