Partnership between Schattdecor and Guararapes wins iF Design Awards 2022

BRAZIL - The Perspectives MDF collection, the result of a collaboration between Schattdecor and the panel manufacturer Guararapes, was awarded the iF Design Awards 2022, the world’s leading Design award. 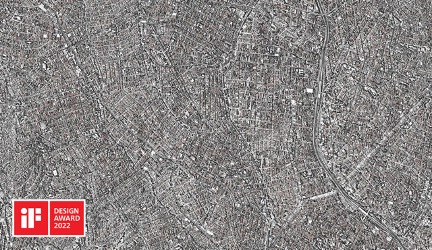 Inspired by the work of the photographer Benjamin Grant and with his contribution in the development, it was made possible through Schattdecor’s digital printing technology. The unprecedented project is anchored in a vast study in design and trends, representing the current zeitgeist, a period in which we are experiencing major global transformations.

"The Overview" is the experience reported by astronauts who, during space missions, had the opportunity to view the Earth from a great distance. This phenomenon causes a cognitive

change, a great transformation, and a strong sense of self-awareness, both about human limitations and boundaries, and the greatness and wonder of life.

This profound concept guides the work and projects of Benjamin Grant, author of the book Overview, and served as inspiration and reference for the Perspectives collection. "The Overview

Effect" invites people to broaden their gaze, bringing new possibilities also to the universe of architecture and interiors.

"We wanted to provoke a new look, a new perspective of the planet we live in. This was the central idea of the project, which was only possible by combining high technology with the disruptive process of innovation in pattern creation" commented Sandra Mohr Ludwig, sales and design director of Schattdecor do Brasil.

The project is innovative, both in its production process and in its exclusive design. The development of the collection was a joint effort between the International Design, Commercial and Digital Printing teams of Schattdecor, the Marketing and Products team of Guararapes and Photographer Benjamin Grant. The technology employed in the development of the Floresta and São Paulo decors is exclusive to Schattdecor, from the treatment of the images to the printing

"This was one of the most daring projects we have ever done, satellite images were processed by our partner Schattdecors design team in conjunction with Guarararape’s Marketing. It was a great team effort that involved an international team of eight people over more than a year and enabled a unique, innovative and disruptive result" said Humberto Oliveira, marketing manager at Guarararapes.

The idea of the project was also supported by the great trend called Outside In, which represents the inclusion of references and natural materials, in addition to external elements, in the living, working and living environments.

The possibility of replicating "The Overview Effect" from aerial images in the design of environments is already transformative in itself. To apply such a special concept in MDF panels, in a viable way to be used in the universe of architecture and design, was the main challenge of

the project, which with the iF Design Award is greatly confirmed.

"This partnership made perfect sense to me, because I have always believed that the larger the scale of the images presented, the better. The fact that I created the exclusive photos for the Perspectives line, taking into account the highest standards of resolution and print quality, gives me the assurance that we have harnessed the true power of the aerial perspective, creating an immersive and inspiring setting wherever these images are applied" details Grant.

Created in 1953, the iF Design Award is one of the most important design awards in the world. Entered in the running for the award, along with 10,776 other products, the Perspectives Line was one of the winners in the Textile/Wall/Floor Products category, a great satisfaction for all involved.

"What a great honor for us to receive this iF Award for the collection we created for Guararapes. It was a true collaboration with the Schattdecor team to bring the project to life, and I cant wait to

see all the places these new Perspectives will go" stated Benjamin Grant.

"Having this project recognized with the "Oscar" of design is an honor, and being able to represent Brazil at the awards in Berlin, as a reference in the industry, in a competition of this level, is gratifying"  remarked Humberto Oliveira, marketing manager of Guararapes.