LITHUANIA - In September 4th, a record breaking investment in Lithuania has been presented in Akmenė - VMG (Vakarų Medienos Grupė) officially opened one of the largest particleboard factories in Europe, with the investment reaching a total of EUR 146 million. 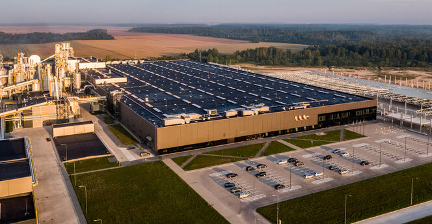 The factory will be able to offer the market particleboard as thin as 3 millimeters. The unique technologies for the Akmenė factory were developed and installed by the German company Siempelkamp.

Annual production capacity of the factory will reach up to 600,000 m3 of particleboard. Future plans consist of further development of production capability. The construction of the new VMG  factory began in August 2018.

Currently, a second factory is rising next to the first VMG Akmenė project - a cabinet factory. The EUR 60 million investment project is scheduled to become operational next year.

VMG is one of the largest wood processing and furniture production groups in the Baltic States, uniting 16 Lithuanian and foreign companies with more than 4000 employees. Over 90% of VMG products are exported to foreign countries. During 2019 the Group’s unconsolidated sales increased by 13% and reached EUR 394 million.